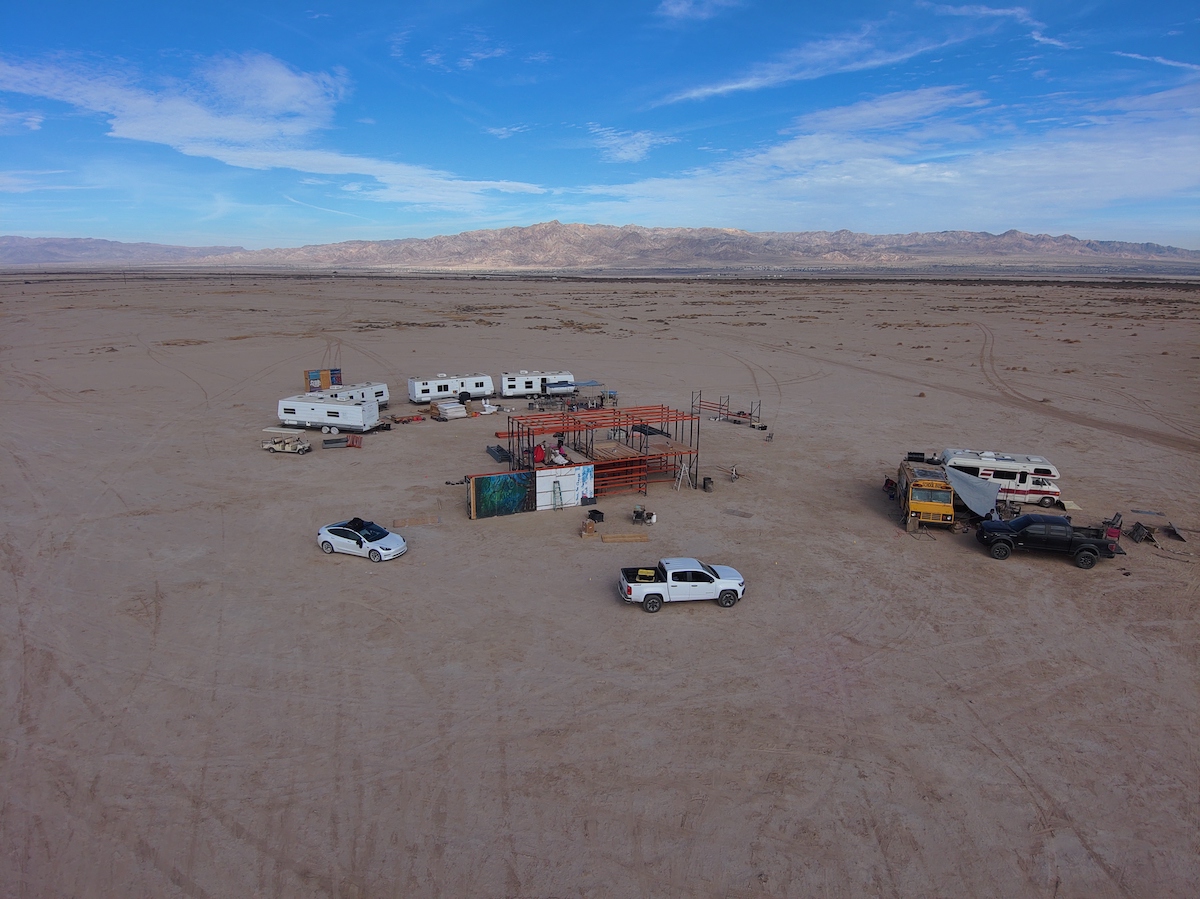 On the eve before most Martians begin to descend upon Bombay Beach to renew Mars College, I'll share a small report from the field.

On the eve before most Martians begin to descend upon Bombay Beach to renew Mars College, I’ll share a small report from the field.

This is now the third incarnation of Chiba, following BRAHMAN in 2020 and the first Mars College in 2021. In 2020, we only established base camp in mid-January, and in 2021 on New Years Eve, whereas this year we began building by mid-December and already have two weeks of progress by a dedicated build crew.

Since Chiba consists of four houses (Air, Water, Earth, and Fire), the strategy for warmup was to build the first house (Water), taking time to focus on it and perfect the design and construction, so that we could parallelize and quickly roll out the other three houses when “build week” begins in January.

What we learned last year was that we needed to do more to protect Chiba from the elements, particularly the wind, and so this year there is much more space enclosed by walls, especially around the communal kitchen, which is in the Water house.

This year we are taking a step foreward with our kitchen. In 2020, we did not even have running water on Mars, let alone a kitchen. In 2021, we figured out how to transport and distribute water around Mars, but still did not have a kitchen, instead relying on the trailer kitchenettes. This year, we got a large sink to deal with dishes effectively, and are working on greywater collection. Fortunately, our friend Jack the plumber gave us some advice. 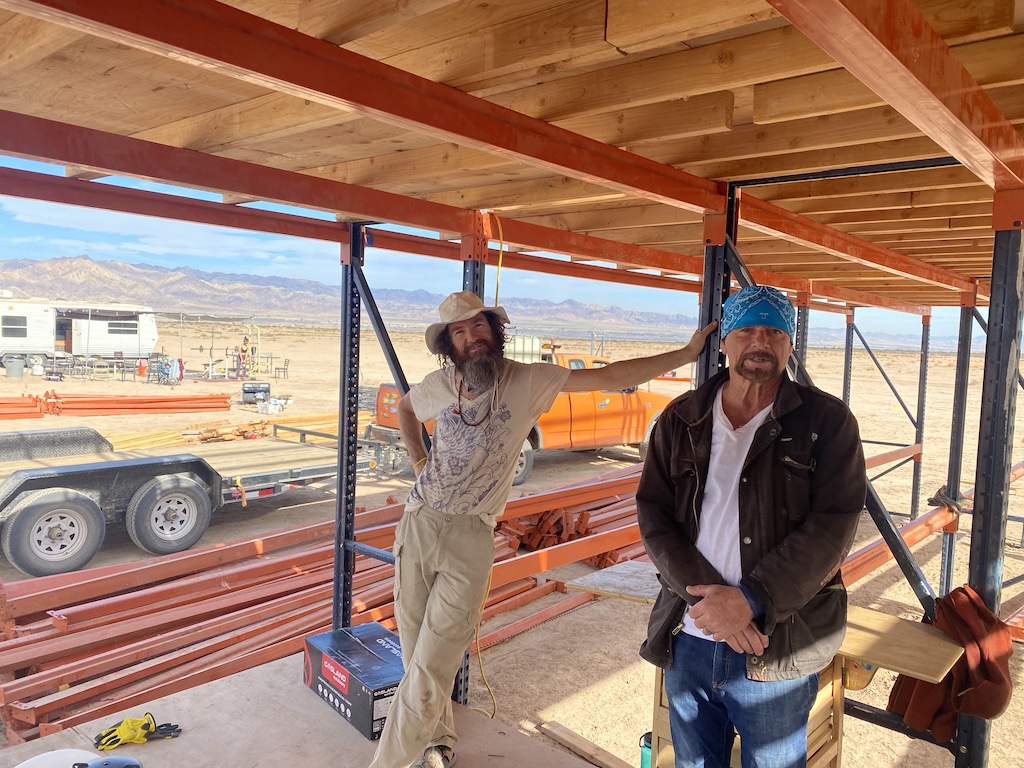 Another thing we are doing for the first time this year is a compost toilet. The past two years, we’ve had porta-potties on Mars, one of the last vestiges of our dependence on supply chains. Now the porta-potties are gone, replaced by compost toilets – we got good design tips from new Martian Dylan who worked on compost toilets during his last adventure wwoofing. 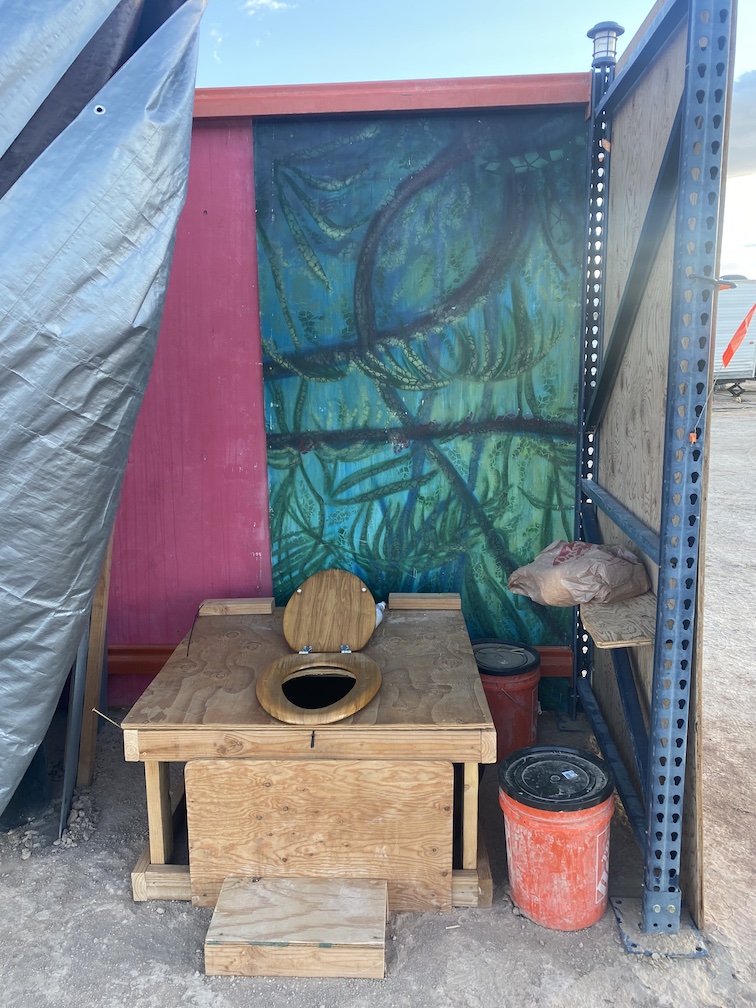 So we finished the mouth (the kitchen) and the ass (the toilets), along with a circulatory system (water) to connect them. Next up is the heart – electricity for Mars to power everything. Efforts to build solar power on top of the first house are underway. When that is stable, we move on to the internet. It’s conceivable those things are functional by the time most Martians arrive in the first week of January.

We’re excited for the new cohort arrive and begin a new season of Mars College. Rather than needing to figure out all the bare essentials and fundamentals in build week, we can focus on decorating and building out all our subsystems to last for the next few months. With everything ahead of schedule, we may even be able to move ideas week up by 1 week, to begin the study program and life on Mars.