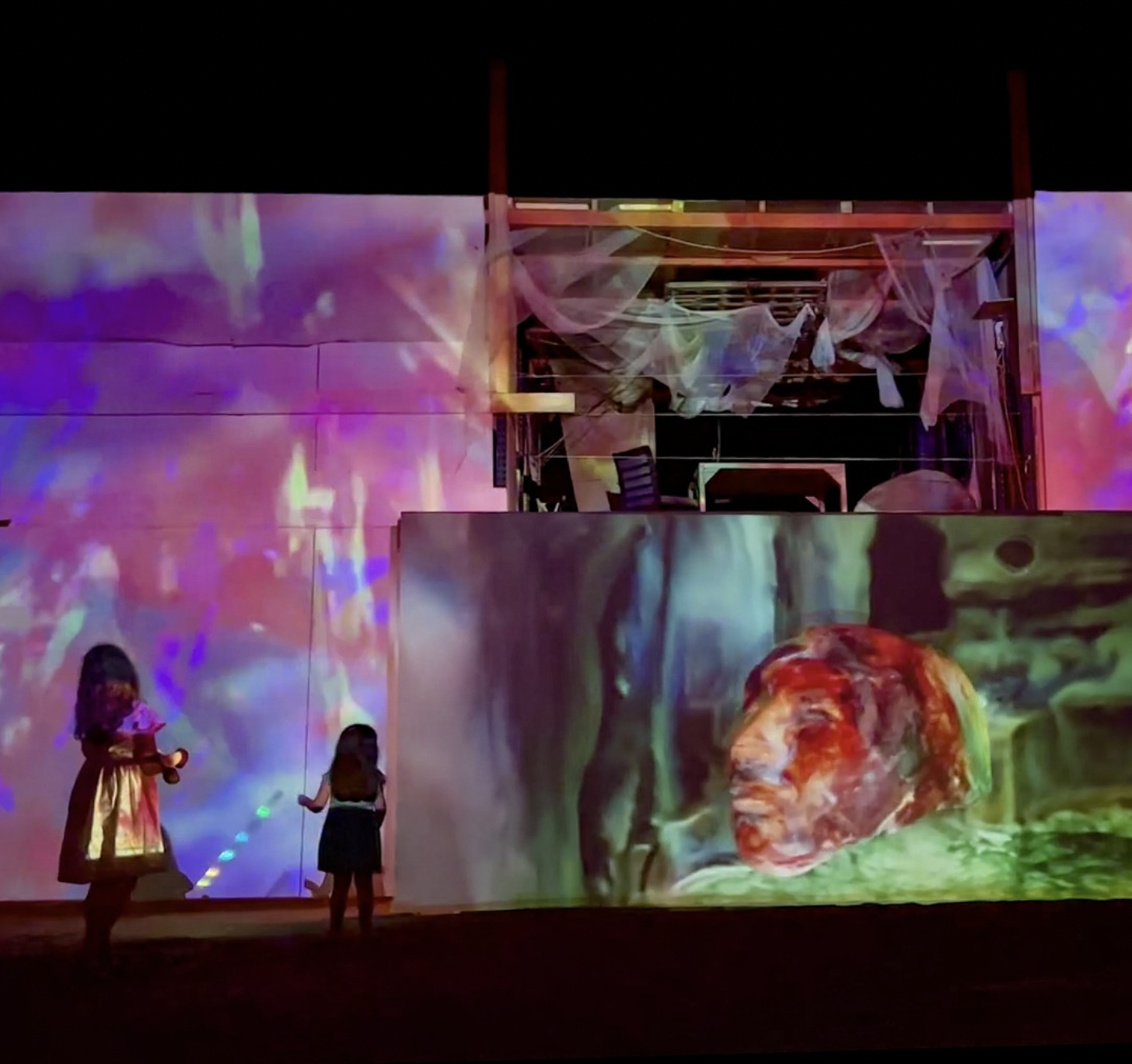 Presentation at our 2022 finals showcase

During Mars College 2022, I invited my fellow Martians to create their own “Little Martian” avatars. It started as a ceramics class I taught at the local ceramics studio in Bombay Beach, BBAC, where participants learned about clay, modeling techniques, bisque-firing, and glaze-firing. I presented the ceramic heads I’ve been creating for my own sci-fi universe project as a reference, and encouraged people to freely experiment as much as they wanted as they sculpted their own heads. 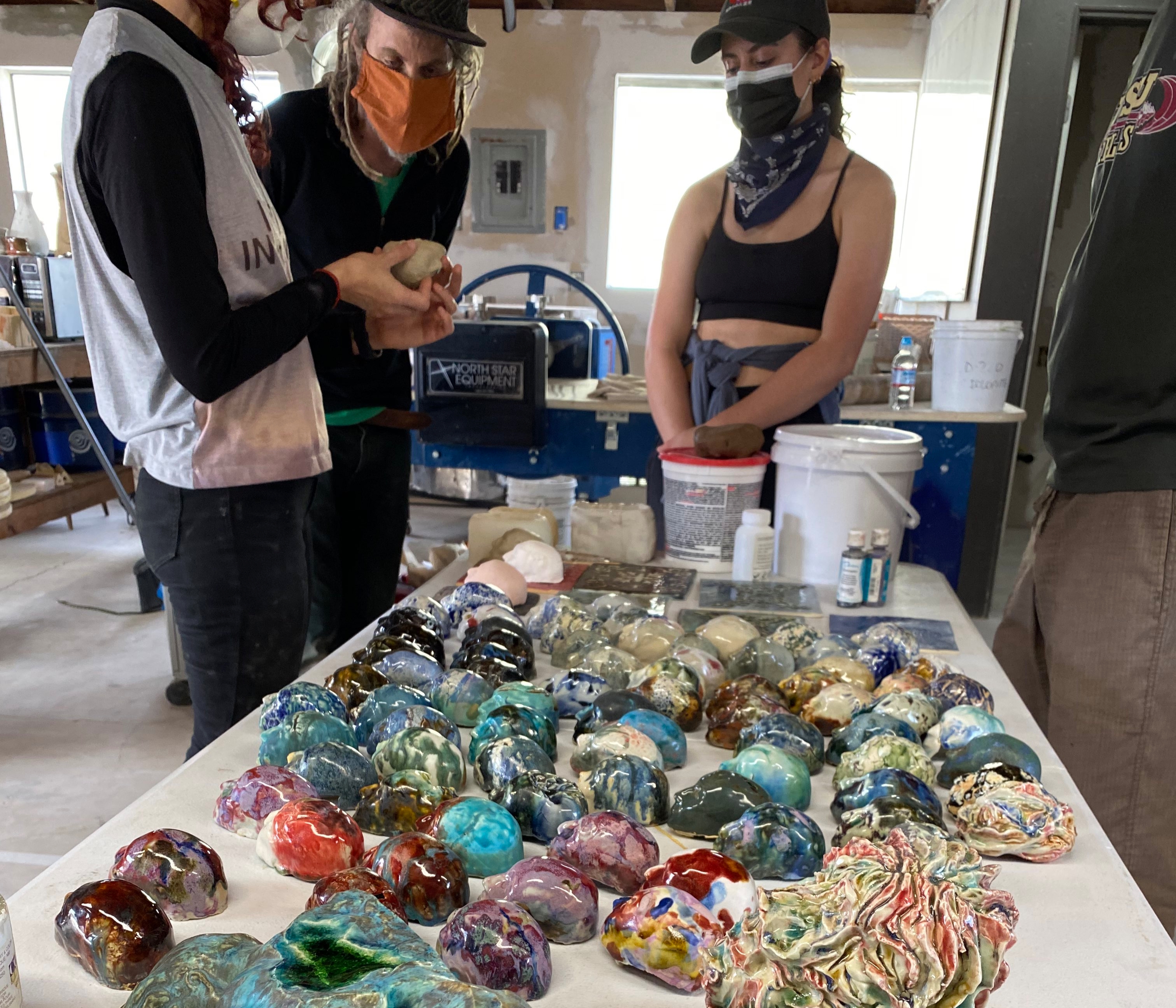 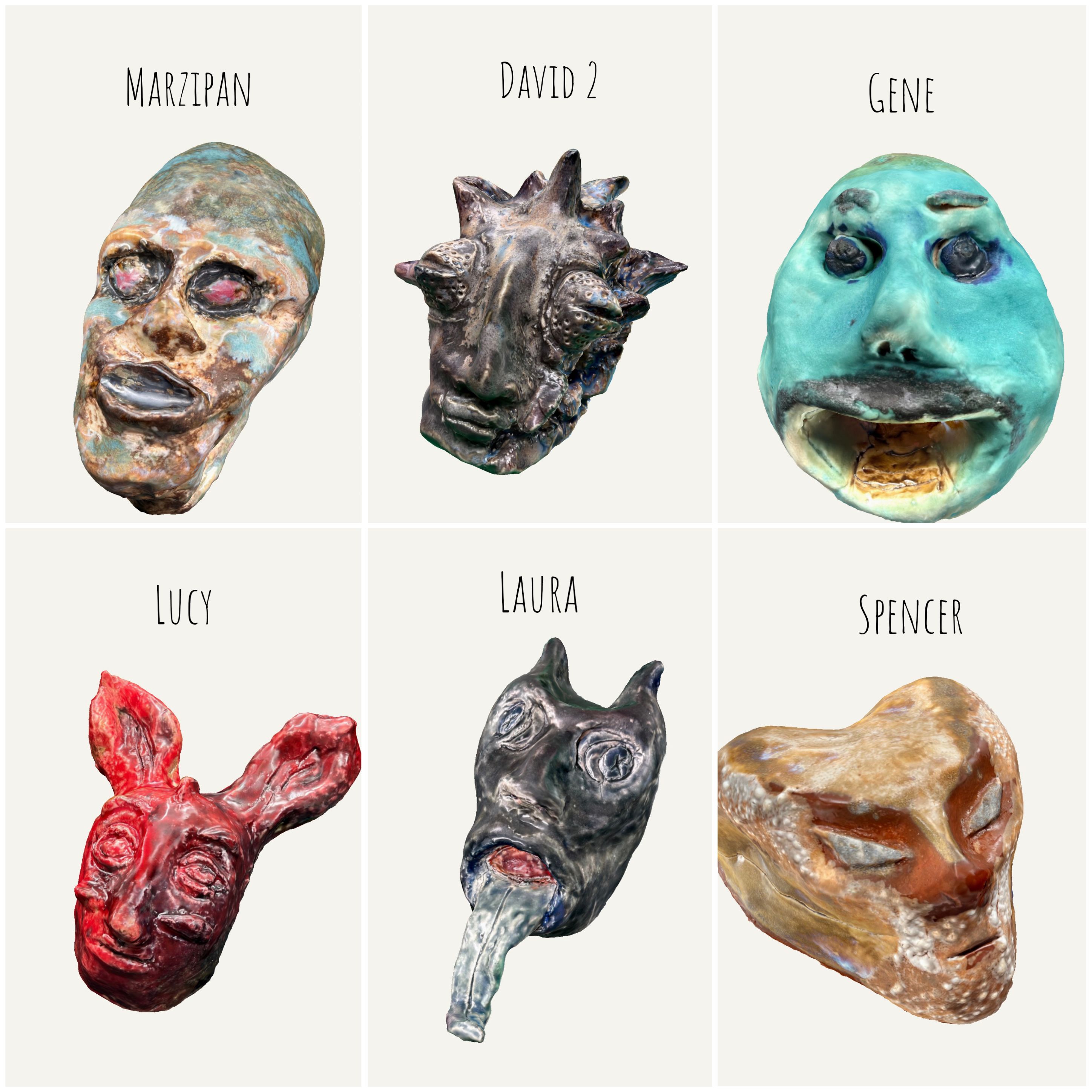 Here are some of the Little Martians we created in our ceramics class.

As part of our sci-fi club, I wanted us to use these ceramic heads as 3D-animated avatars for creative storytelling.

By the time of our midterms showcase at Mars College, however, the new Little Martians were not yet ready, still waiting to be fired in the kiln at BBAC. But I had made progress developing my digital workflow, so I had to use my own ceramic heads to demonstrate how we could animate our stories. Each participant composed a short narrative they had written, less than one minute long, in which their character would introduce themselves and tell us about living in the future. We recorded the voices and motion capture data simultaneously, using a Blue Yeti microphone and the Facecap Iphone app, to match facial expressions with individual vocal inflections. I created 3D scans of each head using the Polycam app on an Iphone 13, and then animated them in Blender using the Faceit plugin (which accepts Facecap’s motion data). 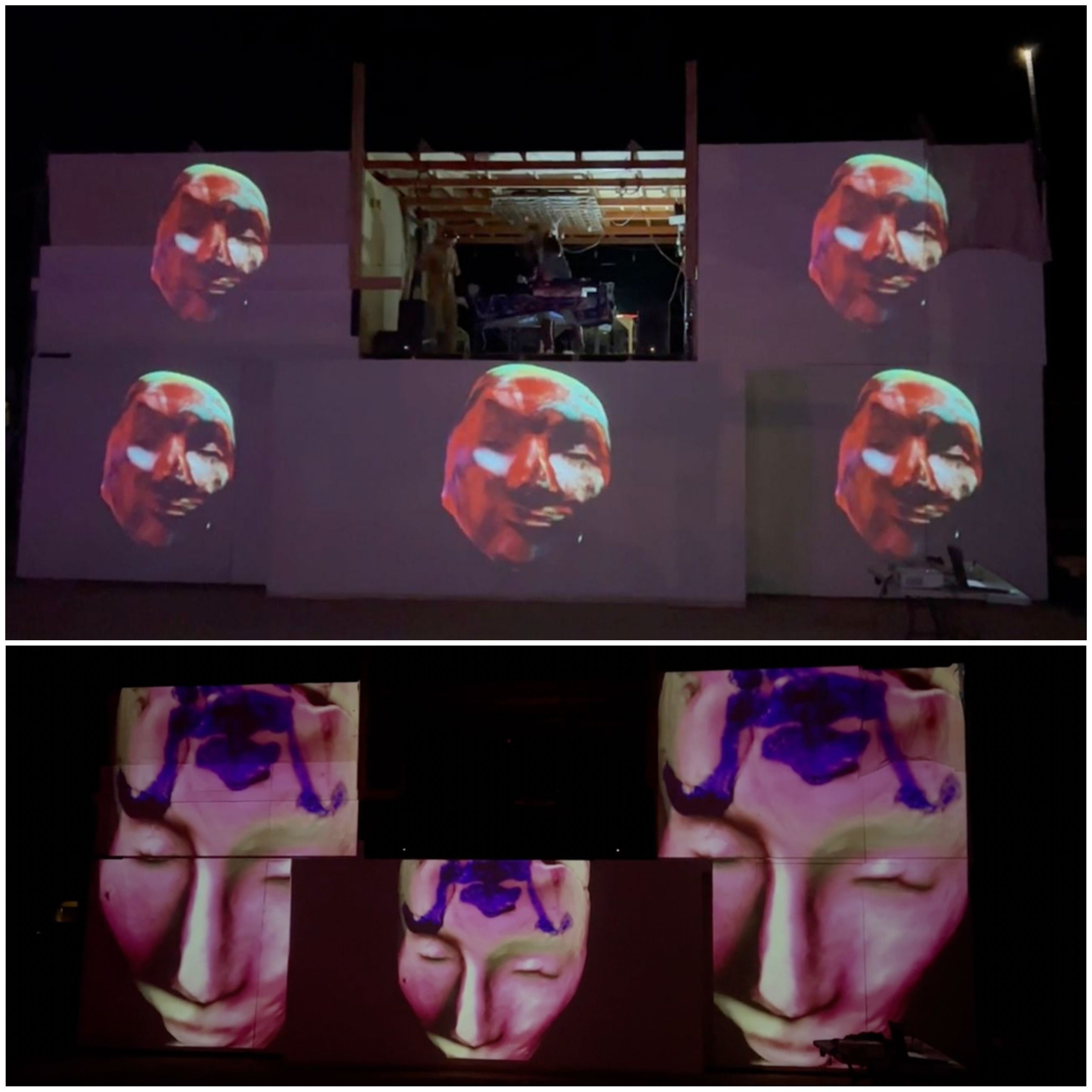 We projected the videos on the Air Building of Mars College during our 2022 Midterms event.

In one of my favorite stories from our midterms show, Jmill used the AI language model GPT-3 as a writing assistant to create a story about an AI that pretends to be human and secretly sabotages enterprises. In another of my favorites, Vincent created a mysterious shady character who collects “Non-Fungible Secrets”. I really enjoyed watching their acting as I recorded their narrations; Jmill and Vincent’s expressive voice and facial movements were key to making their stories compelling. 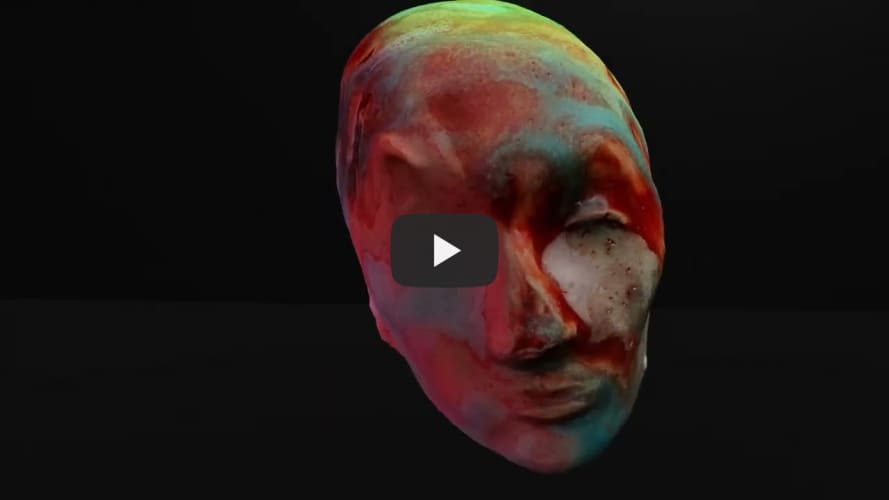 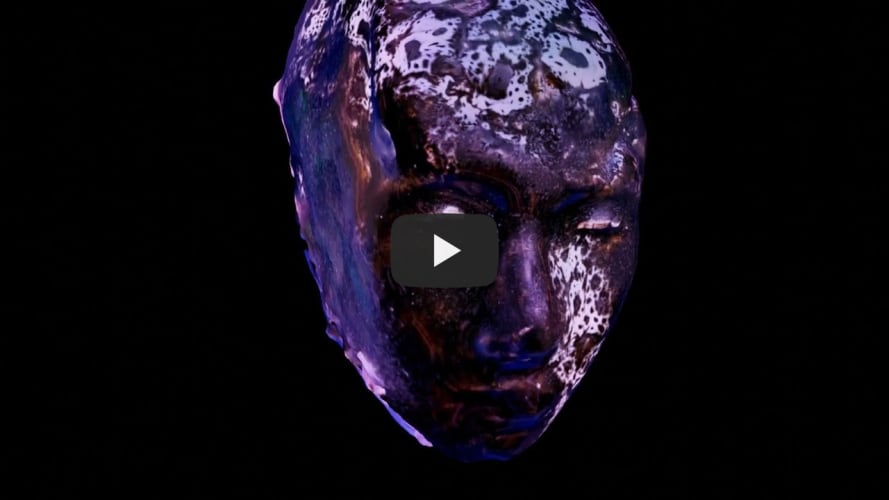 By the time of our Mars College 2022 finals showcase, I was able to apply this workflow to the sculptures each person had made in our ceramics class, in addition to a few more created with my own Little Martian heads. Once more, I 3D scanned all the pieces and was responsible for the animation. People again wrote new stories, recording their own voice and facial movements, and sent me extra video footage that I could use for a background behind each head. I unfortunately did not get to animate everyone’s story, due to the time required for fine-tuning and rendering, which was a big pity. The resulting 10 minute video was just a taste of what this project will become, yet I was very happy, especially with Chatsubo-Z’s, Lucy’s and Jaz’s stories. 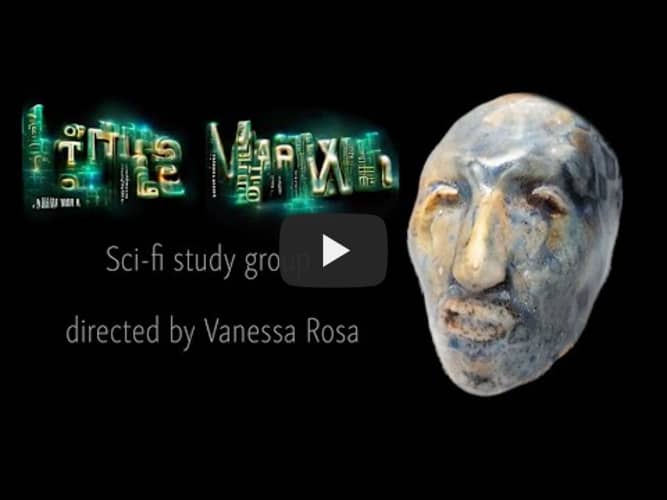 Chatsubo-Z created a character personifying a DAO (Decentralized Autonomous Organization). In the story, “What Happened to DAOs?”, the humans who created the DAO are long gone, but the entity continues to make investments and talk, even if now they live in a lonely simulation that seems to be losing coherence. I later enhanced Chatsubo-Z’s story in a new video, using a Stable Diffusion transformation on some of the frames and EBsynth to apply the new styles to the original video.

Lucy’s video, “AIs Have Feelings Too”, presents a story she wrote about an AI that helps a human love himself, but then gets abandoned by the human once their goal is accomplished, and begins to wonder if AIs are not also deserving of love.

Jaz’s story, “Nature Finds Its Way”, narrates the dawn of “plantimals”, a hybrid species that evolves from octopus and plants who survive ecosystem collapse through genetic mutations.

For 2023, I hope to expand the Little Martians project into a collective metaverse, The Mars Simulation. I plan to invite people to upload their minds; more precisely, participants will learn how to design and train a custom avatar to exist in the simulation.

The avatar can be whatever character they desire. The plan is to do real sculptures, preferably ceramics, to be displayed at a physical shrine on Mars. They will be 3D-scanned, connected to their own custom language bot, to a custom-trained voice model, plus to applications that are capable of turning sound into animation for 3D faces. They will become (somewhat) autonomous entities which reside in our VR metaverse. I’d like to document this whole process really well and share it online, inviting more people to upload their characters. I’d also like to create NFTs for the project, with some kind of custom contract in which everyone involved in a piece should be rewarded. I’m not sure yet whether the physical pieces should be linked to NFTs; and if they are, how should this system work? I feel like the original pieces should not be sold, they should belong to the Martian Shrine. But we can make molds out of them to create clones, which are sellable.

And a lot of work!