For me, making art is a way of connecting to the space where I am and the people around me. I was just starting to research organic art materials (if anyone is interested in the topic, I highly recommend this book), how to make my own art supplies, when I first went to Mars College, then still called BRAHMAN (Bombay Radical Artificial Humanist Media Arts Nexus). Being in the desert, dealing with such a harsh environment, with sand storms, intense sun, freezing nights, is a constant challenge, but one thing that is abundant is clay. Our desert is filled with clay! I’m passionate about materials and techniques, specially the merging of traditional and contemporary ones, so I decided it was time to dive into the world of ceramics.

First I had to learn how to identify and collect local clay. It was easier to recognize clay after the rain, thin clay pieces concentrate on the surface and look like abstract leaf sculptures (see it on the left picture above). I collected some of these thin clay and they gave me results just as good as the pieces I collected digging one or two feet deep into the soil. It’s better to dig in places where one can see marks of water streams a few days after strong rains, when the clay underneath is still wet, visible and easy to move. Once everything is dry, the soil becomes much harder to dig, it is also difficult to recognize what is grog, sand, and what is mostly clay. The clay pieces were far denser than the rest of the soil, but softer than stones. I used a kitchen strainer to separate the clay from sand and grog, the last two would fall through the holes when I shook and the rocks I’d just take them out with my hands. Then I’d put the clay I collected in a wide bucket and fill it with water. After a few hours the rocks and sand fall to the bottom, water rest on top and clay in the middle. So that makes it easier to separate everything. One should discard the bottom and the top, then filter the clay with fabrics, until it reaches a good consistency for modeling. 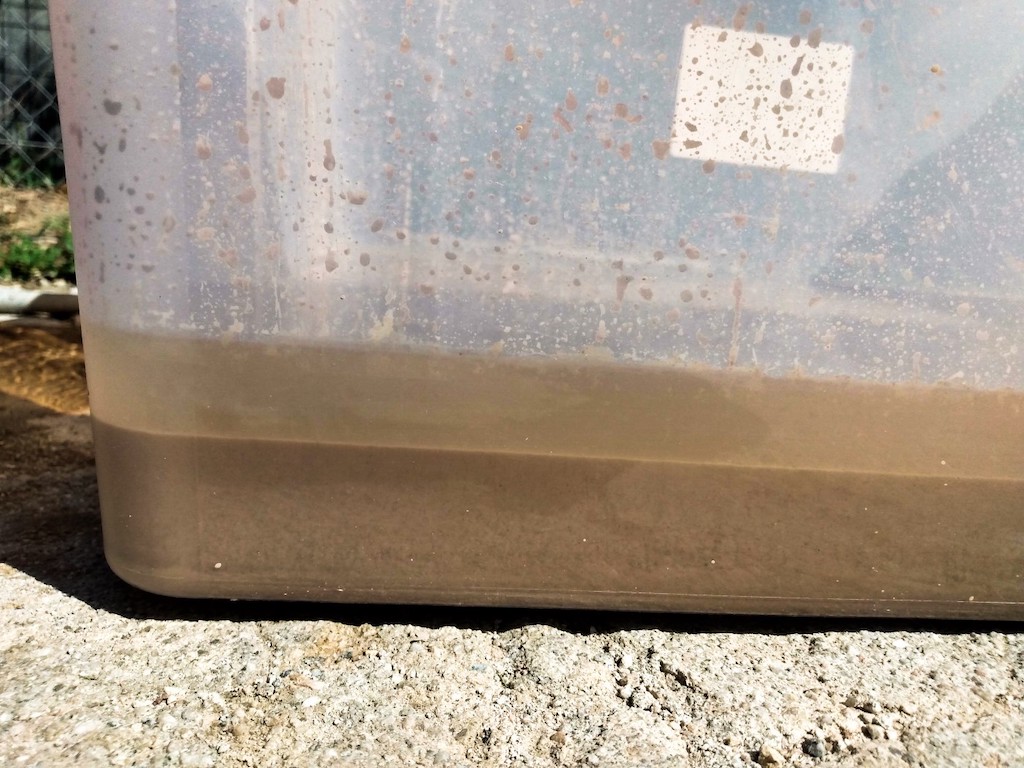 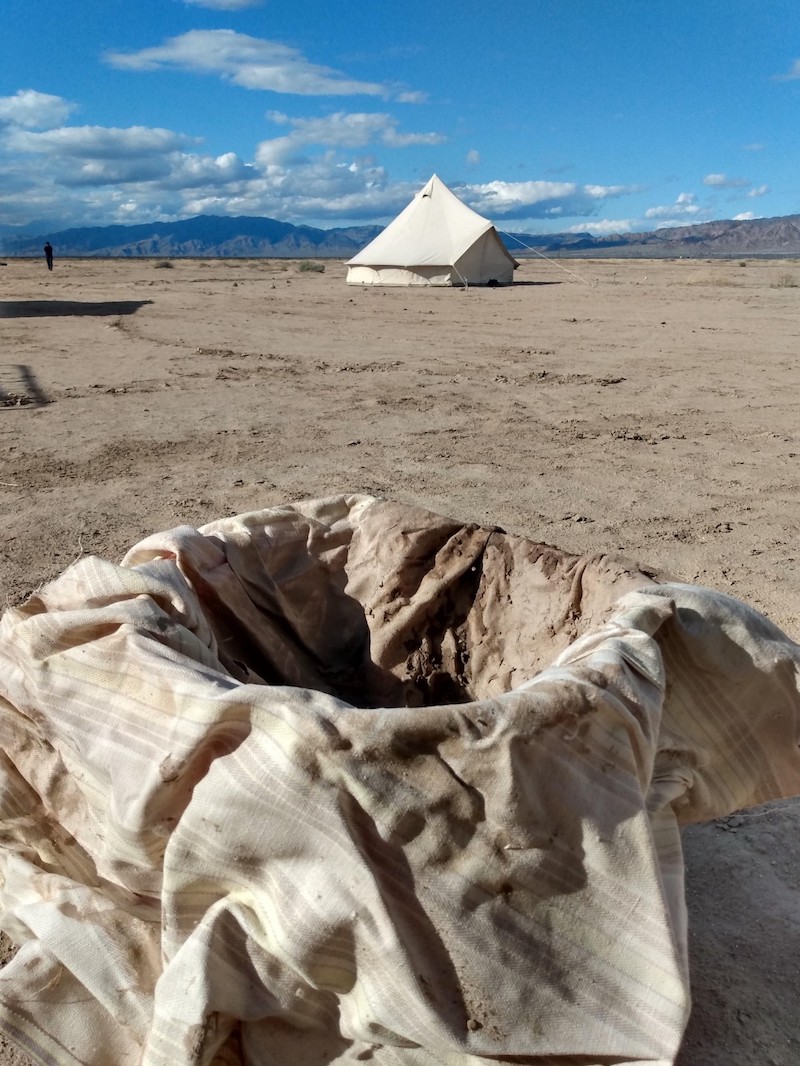 Some of the instructions I’ve found in books and online mentioned people should look for clay close to rivers, then they should make a little ring around one’s finger with the found clay. If the clay cracks a lot or can’t sustain the ring shape without breaking, then it’s not suitable. The problem is, often the clay will be too wet or too dry to try this at all, so I found this method very limited. I just tried feeling the consistency of everything I suspected to be clay, trying to recognize if it was very sandy or dust like. Also, if one is collecting clay from an untested soil, the clay will probably come with salt and unknown minerals. The samples from our Martian desert were very high on salt, which created some yellow spots and a goldfish glitter like texture in some of the pieces after they were fired. I suspect they also have some iron, as the clay turned out with a reddish hue. Unfortunately these details are not so visible in the photos I have here. 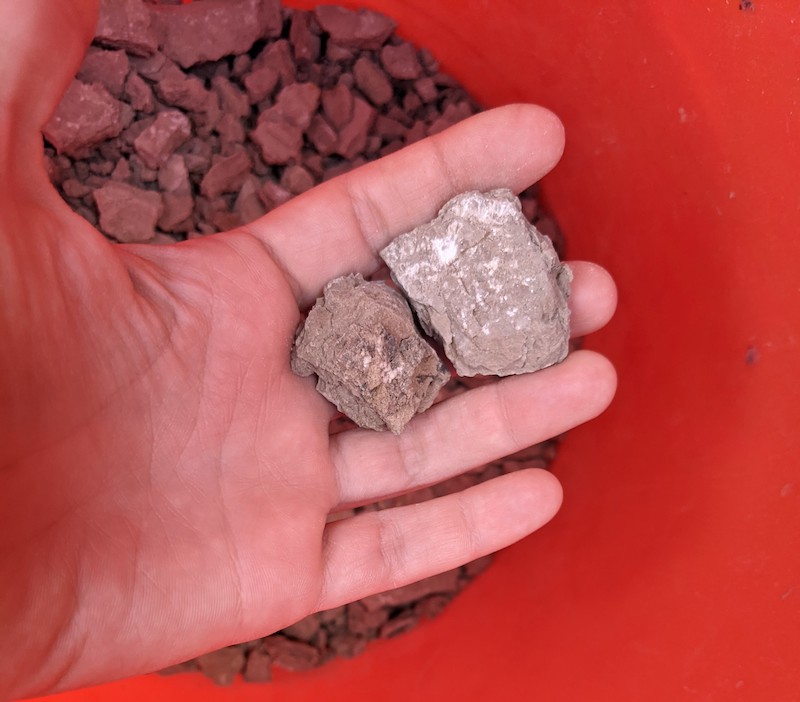 Clay pieces collected when the soil was very dry.

During BRAHMAN 2020, I tried to make my own primitive kiln. This technique is also known as pit fire and many use it until nowadays because it makes very particular burn marks. First I had to pre fire the pieces, as it’s important to make sure they don’t warm up too fast, otherwise the moisture in them would make them break, even explode. To do this, I put the pieces close to a camp fire and I’d turn them when I noticed the side facing the fire was warm. Slowly, I put the pieces closer and closer to the fire, constantly turning them in the process. The next day I dug a hole in an oval shape, put the pre fired pieces with a lot of dry straw and thin wood branches covering them. I put a metal grid on top of the hole, leaving an area open for air flow. On top of the grid I made a big camp fire and then I just relaxed and watched it burn. The the next day I had to dig to see how the pieces turned out. Here are some photos! The experiment was successful, the clay turned into ceramic bisque, however, as the temperatures reached were not very high, the pieces came out very fragile.

Initially I concentrated in creating two kinds of pieces: tiles and little head sculptures. I used my laser cut stencils to make patterns on the tiles. I started to call the sculptures “Little Martians”.

Pre firing the pieces, and images from the successful pit fire kiln. Notice the space for air flow on the bottom of the circle hole. 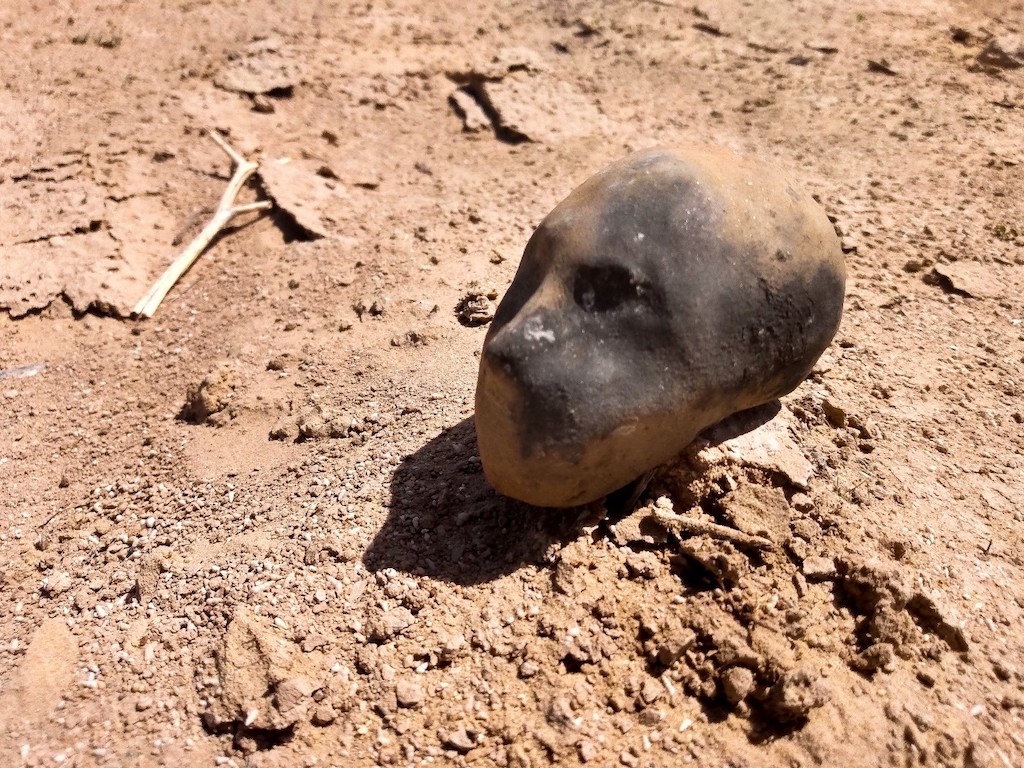 The first Little Martian, made with local clay and primitive kiln 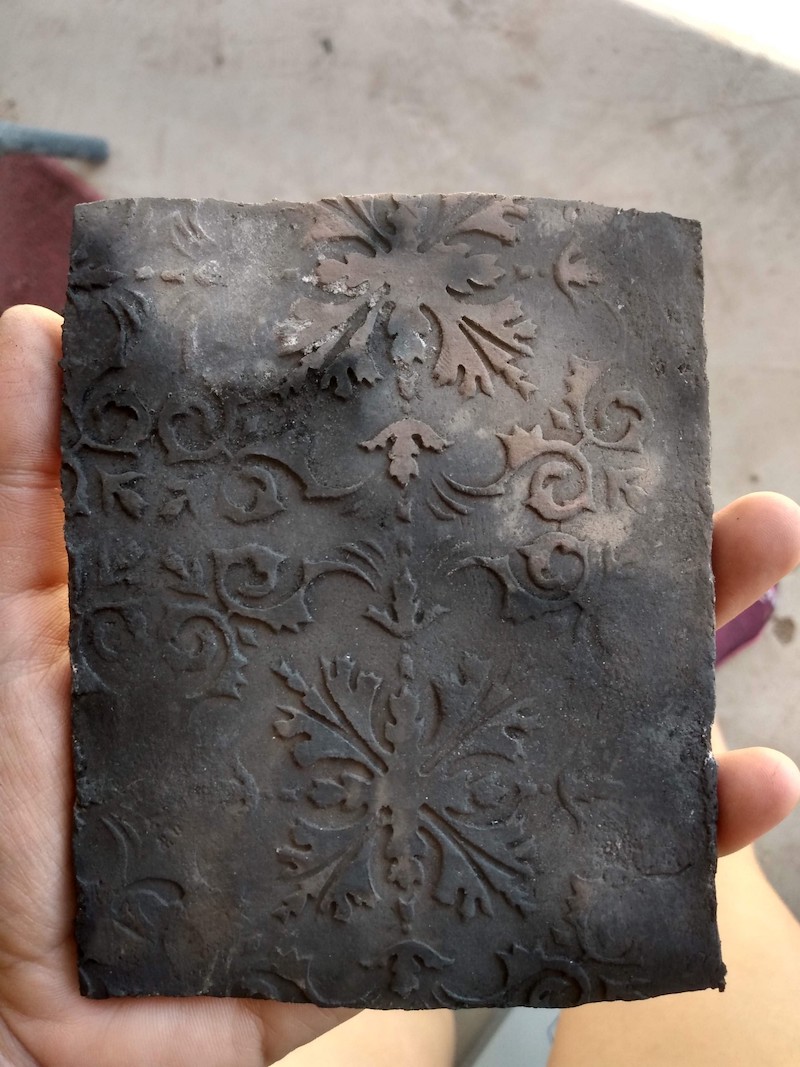 In 2021, I had much more time and supplies to continue the project. I created a food safe silicon mold out of one of my humanoid alien like head sculptures and produced a series of works based on it. We had a great partnership with Bombay Beach Arts Center (BBAC), where I had access to their electric kilns.

Making the silicone mold, using a Martians I created while I was in Brazil, using professional materials and glazes.

After creating a bunch of Martians, I realized the pieces looked more interesting if I put the clay into the mold in a way that made it crack. The cracks gave them personalities and made them look like ancient ruins. The pieces went great when I fired them on cone 04 (1915 F. 1046 C.), that means they became bisque pieces, therefore they are not clay anymore, but ceramics. This bisque had better quality than what I got with pit firing, they were stronger.

Little Martians and the Little Gene Kogan I

Then I got excited and tried to add a nice glaze to them and fire at cone 6 (2232 F. 1222 C.). Well, that was a bit of a disaster, but at least an interesting one. I learned that not every clay body can resist high temperatures and one should extensively test the clay in different temperatures, specially if one is using someone else’s kiln. Also, if one is testing a clay, it’s wise to put a ceramic plate under the pieces, to make sure that if they melt, the kiln shelves are not affected. As I did none of these things, my local clay Little Martians all melted and merged with a head sculpture I created for Gene Kogan’s birthday. Considering that Gene’s artwork talks constantly about collective intelligence and the hive mind, we considered that the work was a successful homage, at least. 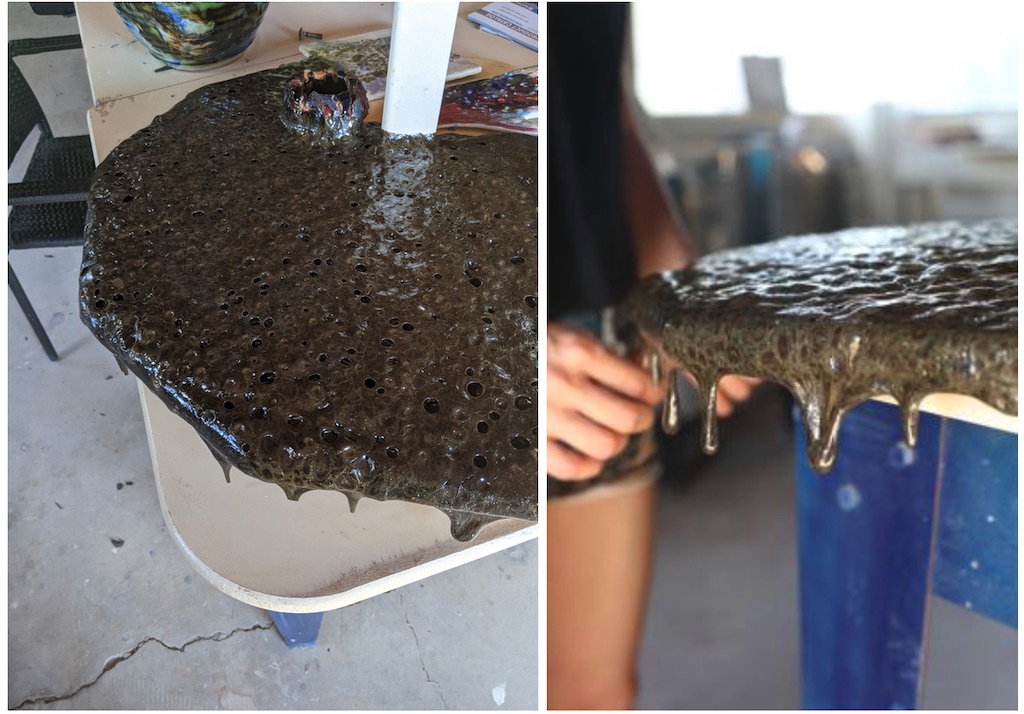 What happens when one doesn’t test the clay enough to know at what temperatures it melts.

To continue this project, we plan to acquire a pugmill clay mixer for BBAC. Then we should be able to use local clay, analyze and separate the substances in it, mix it with other clay bodies and materials, finally producing a high quality clay in a controlled way. We hope to use the many kilns at BBAC to produce a whole series of ceramic pieces that we could sell and then fund our educational/artistic enterprise.

Let’s see how it evolves!